Below Left:  Brooke Marchelle. She is Scarlet's maternal granddam.  I never had a chance to meet her, Franne had sold her before I got to see her but I can see a strong  familial resemblance in the nose and head. 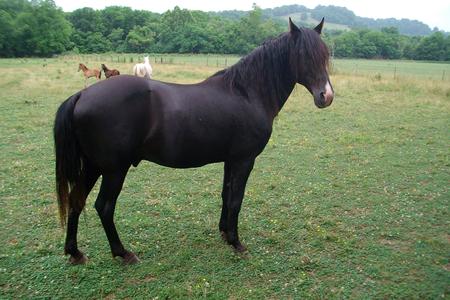 NFF Wilson's Aurora when she lived in Colorado and later in Idaho. I'm happy she is back on the farm again as she is the only daughter I have of her dam, Krispy Cream. Aurora is a big mare, over 16 hands tall, but laid back and sweet tempered.

Kris was a proven broodmare and produced size and color consistently. Her foals are very athletic and well gaited. Kris came from  the Pulaski, TN area and was from a long line of good middle Tennessee usin' horses. She traces back to Little Midnight Man who stood  at the Ray Corum stables in Kentucky. I recently  contacted the family to find out more about this  stallion as he appears twice in  Kris's pedigree. I was told he was  a very mild mannered stallion and children were allowed to  sit  on him. Kris's lineage also goes  back to Night Rider who traces to Old Arthur, a non-Allen bloodline. She has a line back to Brantley's Roan Allen Jr. as  well as Red Eagle F-61. She also goes back to Rhoda Allen. Rhoda Allen is a horse that also  appears in the Crackerjack line of horses. The Crackerjack horses were popular in middle Tennessee for their stamina on  the trails. Kris has one line back to Last Chance through Rasch's White Boy. She also traces back to Bud Allen, who was the 1941 and 1942 Get of Sire in the Breeder's Division Championships. She goes back to Go Boy's Shadow who was the 1955 World  Grand Champion Three Year Old Stallion and in  1956 he was the World Grand Champion.  I  am happy to carry on these bloodlines through Aurora. 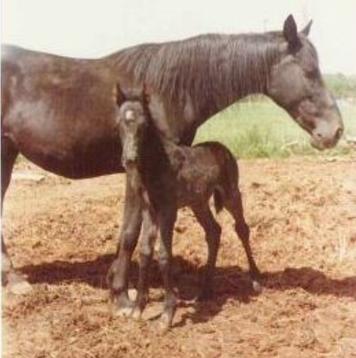 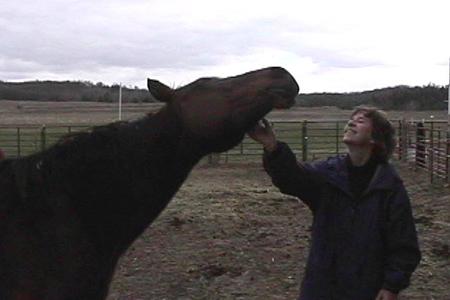 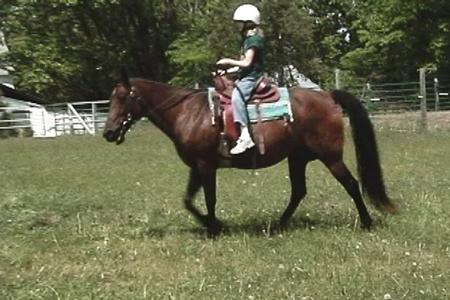 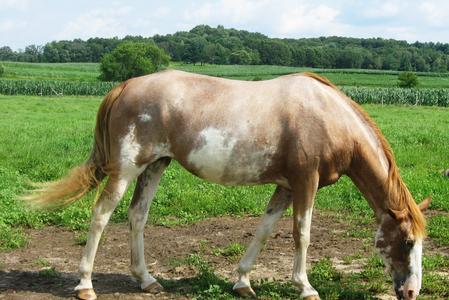 Above:  Aurora's dam, Krispy Cream, Deceased. Below  Left:  Aurora's maternal grand dam, Townsend's Star Time shown at 20 years of age. Lower Right is Aurora in the spring of 2016. She looks a lot like her grandma.

This is Sonic Boom Sensation better known as Brooks. He is the sire to Ostella Silver Lady.  He belongs to Leon's brother, Steve Oliver. I remember Leon taking us to Steve's pasture years ago to see Brooks and he was such a nice horse, gentle and seemed to enjoy company.  Lady's dam is Blue's Maude. I don't have information for her other than she traces back to Delight Bummin' Around and that line is where the roan pattern came from.

Scarlet  in the summer and very pregnant in the winter. 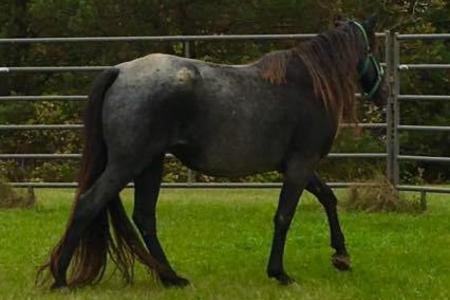 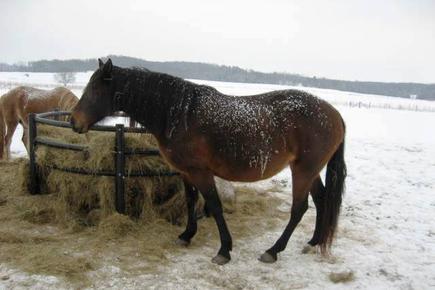 This pretty mare is NFF Wilson's Lady Scarlet. She was sold as a youngster and eventually made her way to Texas  and was Malia Nelson's horse for a number of years. I was offered the chance to buy her back a few years ago and was happy to have another Star Gray daughter in the herd. "Rosie"    is a great mom and the youngest mare in my herd, at age 15 in 2020.  In the photo above, it appears Rosie has inherited some of the jumping ability that her grandsire, Paige's Echo, had.

THE LADIES OF NORTHERN FOUNDATIONS FARM 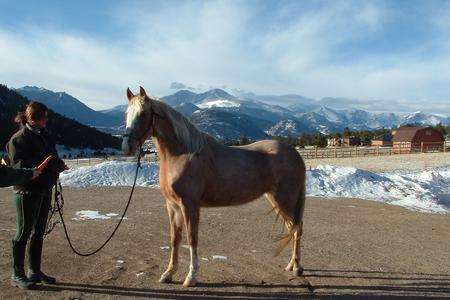 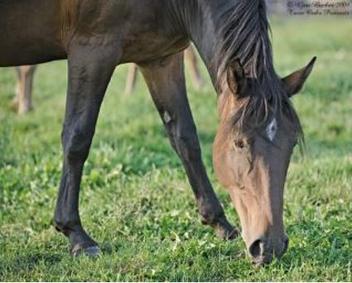 Leon Oliver once told me that you need to look at three generations of a horse to see what the horse will be like for gait and temperament. My mares are below on this page as well as their dams and grand dams if I have pictures of them.

Below Left:  Rosie's dam, Red Bud's Angel, Deceased,  better known as Miss Pris with my niece, Kris on board.

Lower Right: Pris shamelessly begging for jaw scratches. Be careful, Nancy! She will drool all over you. 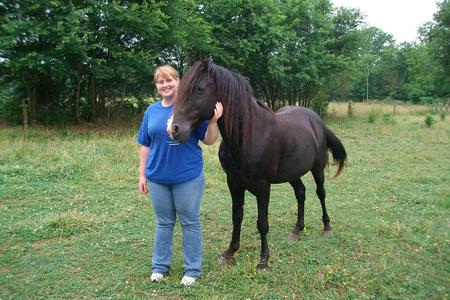 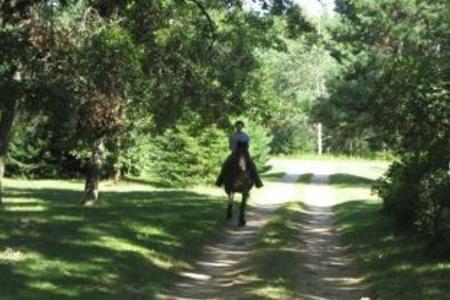 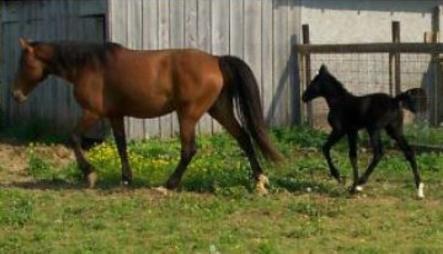 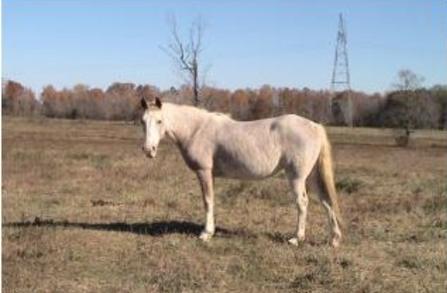 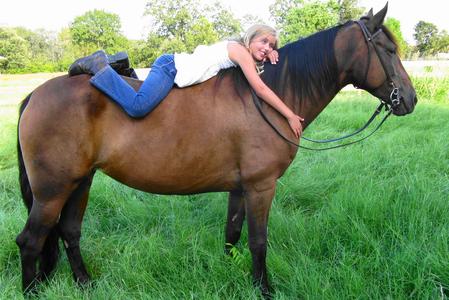 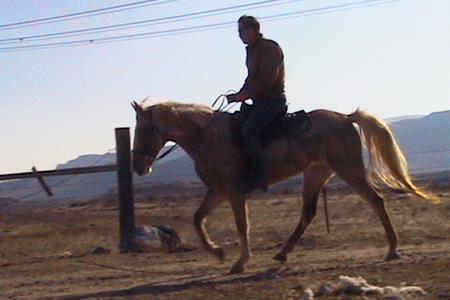 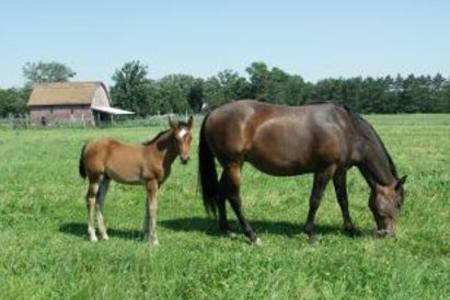 Gypsy's Ramblin Rose pictured above under saddle and with her 2018 filly, Rosalie. I had the opportunity to acquire Gypsy  in the summer of 2018, along with Rosalie, from Kimberly Masson and Nicholas Rico. Gypsy was sired by Society's Lee Allen out of Hytone's Gypsy. She is a very sweet mare and fits in the herd well. Photo below shows Gypsy in Wisconsin at 20 years of age.

​​October 2017, three friends and I went to Tennessee to visit friends down there and their horses. Ostella Silver Lady came from Leon Oliver's herd all the way to Wisconsin. She is a true black (blue) roan. I need to get some good photos next spring of her. She's a gorgeous mare, very sweet and always greets me with a big nicker. I can't wait to meet her foal. Lady has a big loose moving way of going with a huge over stride. 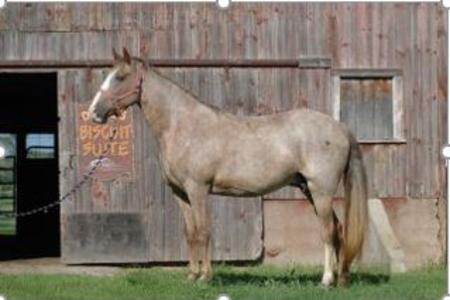 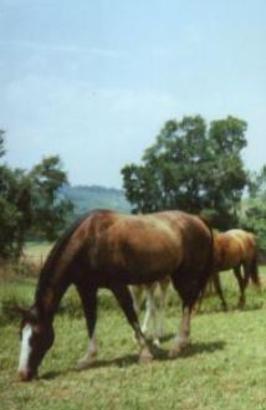 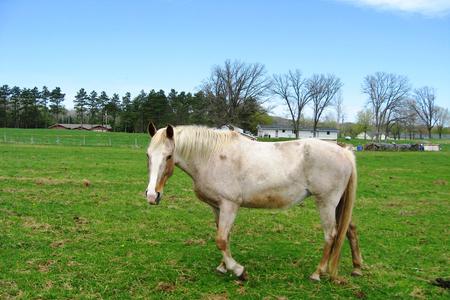 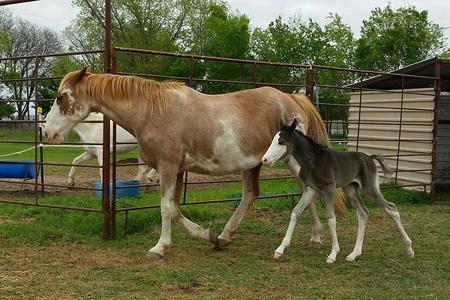 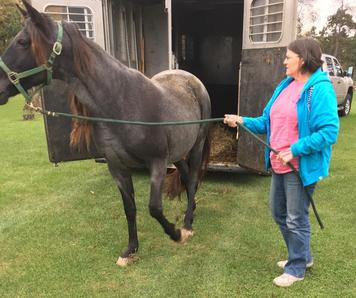 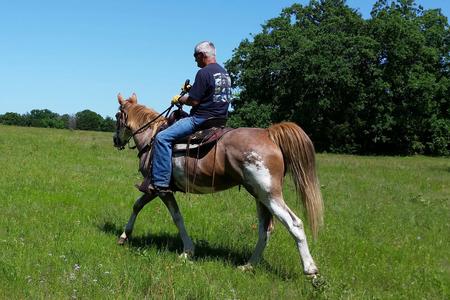 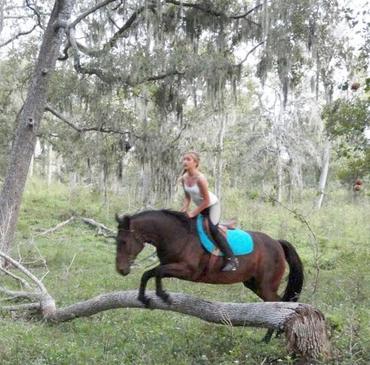 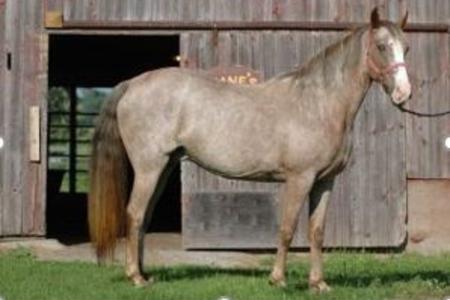 This gorgeous bay mare is Scarlet Star Wilson. She is the daughter of Echo's Star Gray Wilson and Red Bud Lady  Scarlet. I had an opportunity in the spring of 2008 to acquire this nice mare and decided she would be a wonderful addition to my farm.  I have admired this mare since she was a baby. I first saw her at Harry & Franne Brandon's farm near Petersburg, Tennessee. She was 24 hours old and came walking up to the fence and I was able to touch her nose. It was like she knew I was her Wisconsin "Grandma". Scarlet is a comical girl. She will come up and  stand with her head high and beg for jaw scratches, hugs, all kinds of attention.  She is definitely a people horse. Scarlet thinks everyone should love her because "I am Scarlet". Everyone who visits loves Scarlet. She is one of those "in your face" kind of horses who loves everyone. She is an excellent mother and I've enjoyed watching her raise her foals. She's a big mare, almost 16 hands, but a gentle giant. The vet loves working on her because she's a very easy mare to do vet work on.  Scarlet is affectionately known to my friends as Miss Moose because of her size. She's a beautiful mare inside and out.