Duke was born at Confederate Hills Farm, Billy Taylor's Winchester, Tennessee home. He left Tennessee as a youngster and from then on he resided at Gary Martin's Make A Horse Farm in Dighton, Massachusetts. I first ran across Duke's photo in an old issue of the Breeder's Guide and thought he looked like a nice horse plus I liked his bloodlines. The above photo came from Gary Martin, Duke's former owner.

Ever since Star Gray lost his breeding ability, I have asked Gary if he would consider selling Duke and the reply was always  the same - he wasn't interested in selling. I contacted Gary in the winter of 2008-2009 once again to ask if he would consider selling or leasing Duke. I was surprised to get a letter back from him saying he would sell Duke. Duke arrived at  my farm  toward the end of March 2009. He had some major adjustments to make here in Wisconsin.

Our climate is different than Massachusetts, there was a whole herd of mares who came into a raging heat shortly after he  arrived here and I am not kidding when I say five mares were backed up to his fence squatting for him in early April, which is  too early to breed here. Add to that mess, several other stallions on this farm of 17 acres, and he was a bit high strung worrying about those mares, hearing the other stallions whinnying for the mares. It was doubtful for a few weeks whether he would be able to make the adjustment of being here at his age but he did calm down and settled in nicely.

Duke is the son of  Paige's Echo, whose story is quite unique.  Paige's Echo was bred by Danny and Billy Taylor's father and  was sold to J.W. Sanders in 1967. Sanders was not a horse person but liked the big horse and kept him as a pet. Echo was never gelded but he never served a registered walking mare. The opportunity came for the Taylor brothers to acquire Echo and return him to his home farm at 27 years of age. In 1993, his first registered Walking Horse foal hit the ground. The foals of Echo were attractive horses with plenty of natural walk and people oriented dispositions.

Duke has a great disposition and loves to have the area behind his ears scratched.  Strange thing with these Echo horses   about having their ears scratched - Star Gray is the same way! Duke traces back to Wilson's Allen; and on the videotape,    "A Look  Into the Past", Dr. Bob Womack says Wilson's Allen, in his opinion, was one of the finest stallions of all time. He  sired natural, loose moving foals. Star Gray exhibits the looseness of gait that Wilson's Allen was known for.  I am very thankful for the opportunity to own Duke and raise foals by him. He has settled in well here and is a very nice horse. I love this horse! He is a peach to handle at breeding time and I end up breeding mares alone so he has to behave himself and he does. It was a huge blessing to be able to acquire this horse and continue breeding these wonderful Echo horses!!

In the early days of the Walking Horse registry, a number of stallions were considered very good sires. After the start of the TWHNC, sons of some of these went on to win World Championships at the early shows. From 1945-1948, Midnight  Sun and Merry Go Boy became the first two stallions to win the WGC, drawing the focus of many breeders. Many other  stallions were forgotten in the limelight accorded these two black horses. One stallion that maintained a strong court even after  the big-lick became the status rather than just a trend was the chestnut Wilson's Allen son, Society Man. A big, handsome   stallion, Society Man passed along some rare and exotic genes from his dam, Virginia Joyce. Society Man was the 1943 World Champion Jr. Stallion, which in 1943 was a three year old colt that must display a solid canter in addition to the  running walk and flat-walk. Over the years, a number of his sons were used in the stud to perpetuate this line. His lineage continues  today through the  produce of many of his daughters, but only one grandson, a sabino stallion named   Paige's Echo, sired sons  that are actively involved in breeding programs around the country today.

During the summer of 2003, I had some time to research Society Man's background. He had many pages of production records  so I started to go through them all. I was quite surprised to find out of all the sons he produced, only ONE, Paige's Black Boy,  had sons who had sons who are still in production today. Of the Paige's Black Boy sons, only one son has sons who are still in production, and that son is Paige's Echo, the sire of my stallion. To appreciate how rare this bloodline is when  it comes to an unbroken line of males to carry on the Society Man name, there are only six stallions out there in production today, Society's  Duke Allen being one of them.

On November 17, 2011 I received the following email from Sharon Proulx from Massachusetts that really made my day. Duke's oldest foals that I bred on my farm will be five years old  now so this was a huge treat to see hold older foals have turned out, what they are doing and what their temperament is like. Thank you so much, Sharon!!!

"I was looking at your web page (again) and still can't get over how much my gelding looks like his father. Martin's Society General is now 13 years old, 16hh, has beautiful floating gaits, has always been barefoot, and is a total lovebug. Also, he has the little white hairs on his face (the Duke Tattoos). Just thought I'd share some pics."

Billy Taylor wrote an article that appeared in the March 2010 Heritage Highlights about the Grey John bred horses. It is as follows:


Billy Taylor wrote an article that appeared in the March 2010 Heritage Highlights about the Grey John bred horses. It is as follows:

Mr. J. D. Luna, the owner of Buford L. F-11 and Bramlett F-9, stated that Grey John took more blue ribbons than any horse in that part of the country. While it was very unusual at the time, mare owners brought their mares long distances to breed them to this  great horse. Grey John produced many good horses; Buford L. F-11 was considered by most to be the best. He was born April 11, 1886. Ruben Logan of Petersburg, Tennessee, bred his dam, Beauty Hal, to the Grey John horse, and the resulting foal was Buford L. F-11. Beauty Hal was a sabino whose gaits were perfect. She was approximately 15.2 hands and very fine. Mr. Luna purchased Buford L. F-11 as a two year old from Mr. Logan. Mr. Luna owned him until the grey died at the age of seventeen. He was worked in harness and under saddle; he could easily go forty to fifty miles in one day. He carried his head high up, always looking down the road, and had a natural high tail set. He was very stylish, attracting the attention of many as he did a fast running walk. Mr. Luna stated about riding a Grey John bred horse it would make a sick man feel well and a poor man feel rich.

In 1890, Mr. Luna took Buford L. F-11 with him to Tucker's Creek community, which is located in northeast Lincoln County, Tennessee, where he taught school, and here Buford L. F-11 was in service to the community mares for two years. Mr. Luna was then employed at Happy Ridge, Tennessee, as a school teacher and was there for one year. The next year, he moved to the Lois community, located five miles south of Lynchburg, Tennessee. Buford L. F-11 was in service there for five years, which accounts   for so much of his blood in that community. From there, Mr. Luna moved to Franklin County, Tennessee, and taught school for six years. It was there that Buford L. F-11 died on August 23, 1904. Mr. Luna never owned many mares, although it was not unusual  for him to own as many as six stallions at one time. Mr. Luna did purchase and own Mattie Crane, from the Crane family near Lynchburg, Tennessee. He stated that she was one of the best mares that he had ever known. She was the dam of Bramlett F-9,  sired by Buford L. F-11.

Both Buford L. F-11 and Bramlett F-9 were perfectly mannered, often being driven double on a surrey by Mr. Luna’s wife.

In 1910 Mr. Luna moved to Farmersville, Texas, shipping Bramlett F-9 and three of his sons there. While there, several of the local mares were bred to these stallions. After two years, Mr.Luna moved back to Tennessee with Bramlett and one of his sons, Snookie. He was a blood bay and one of the finest walking horses anywhere. Mr. Luna later visited friends in Texas and they offered all kind of inducements to get him to return with Bramlett and his son Snookie to breed their mares. They had begun riding the Bramlett F-9 offspring and were very pleased with them.

Mr. Luna stated that his young daughters would often break and ride the get of Buford L. F-11 and Bramlett F-9. They would drive    in harness, take their places at the plow, farm wagons, and other horse drawn equipment. In addition to their utility, they were always ready for the saddle to show their good gait at the fast running walk. On one occasion at a horse show in Bedford County, Bramlett   F-9 was shown against Roan Allen F-38 and defeated him. Mr. Luna stated that he could always distinguish the get of Buford L. F-11 and Bramlett F-9 immediately; they placed a certain trade mark in their body lines, heads, and ears,    and especially in the long striding running walk.

Several of these horses are non-Allen bloodlines, making them an excellent cross to the Allen horses (added by Billy on 3/1/10 per phone call). 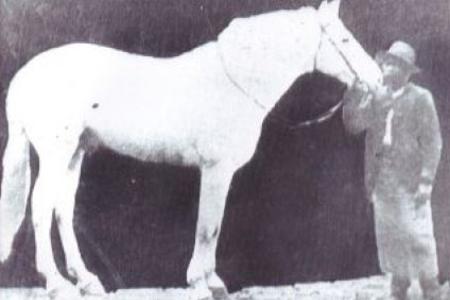 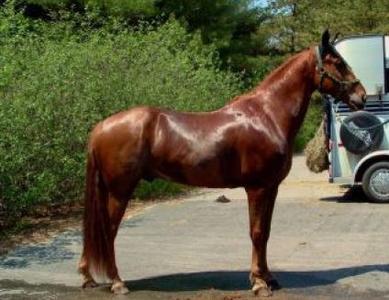 Duke as a weanling. The black sabino in the background is Echo's Star Gray Wilson.  Picture on the right is Bev Rinke riding Duke 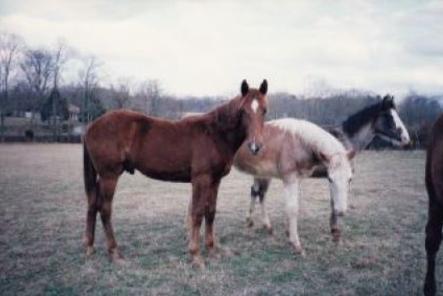 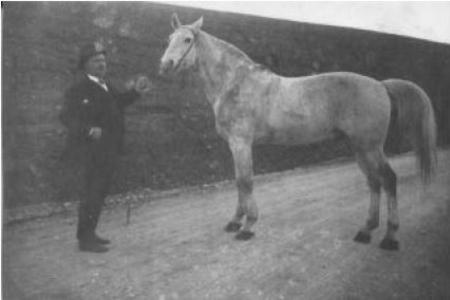 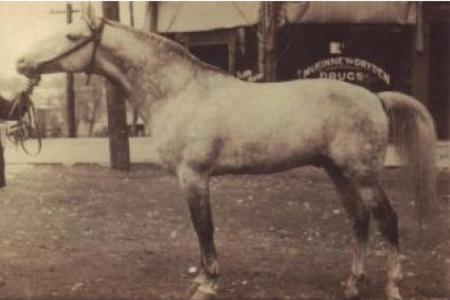 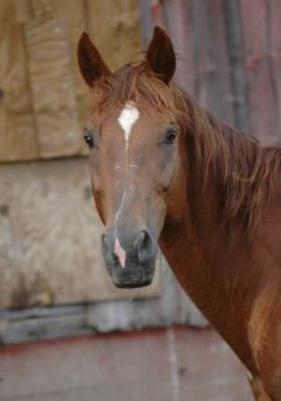 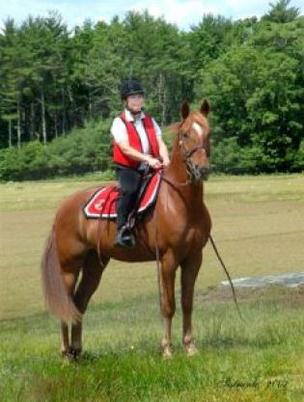 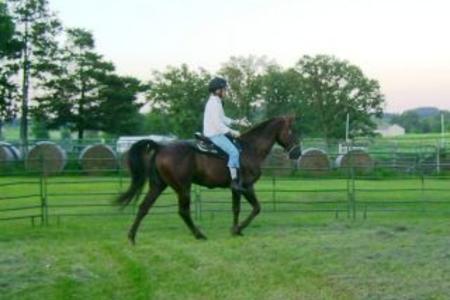 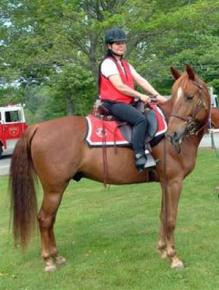 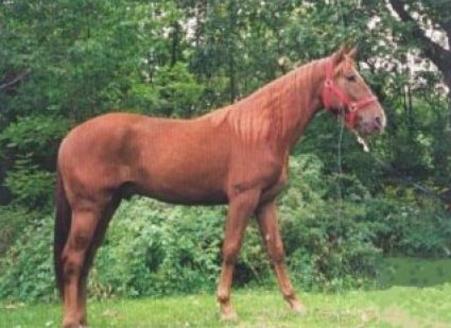