"In 2004 I had the opportunity to train and show Echo's Star Gray Wilson for Diane Sczepanski.  Although the horse had been broke prior to arriving, he in my opinion had not had any formal training.  In only a matter of weeks, Star Gray demonstrated a natural talent in the form of an excellent headshake, nice front end and a tremendous over-stride.  His headset and gait are correct.  His demeanor is passive and willing.   S&D Walking Horses has not hesitated in recommending Star Gray as a prospect to anyone that is looking to breed their quality mares.  We are hoping to see Star Gray back on our farm in the near future for further showing as he placed in all classes and is such a gentleman to work with." Dena PlendlS&D Walking Horses Le Mars, IOWA

Paige's Echo is the sire of this stud and his story is quite unique. Paige's Echo was bred by Danny and Billy Taylor's father and was sold to J.W. Sanders in 1967. Sanders was not a horse person but liked the big horse and kept him as a pet. Echo was never gelded but he never served a registered walking mare. The opportunity came for the Taylor brothers to acquire Echo and return him to his home farm at 27 years of age. In 1993, his first registered Walking Horse foal hit the ground. The foals of Echo were attractive horses with plenty of natural walk and people oriented dispositions.

Echo's Star Gray Wilson is one of Paige's Echo's sons, tracing back to the rare Red Eagle F-61, this non-Allen line offers genetic diversity and hybrid vigor. Paige's Echo's dam, Pinky Lu, was sired by Wilson's Merry Boy GG, blending the famed Merry Boy  line with a full sister to Miller's Wilson Allen, one of the nation's leading sires of flat-shod show walkers in the late forties. The dam of Echo's Star Gray Wilson was sired by Star Gray Wilson, a line-bred Wilson's Allen horse that stood at the stud farm of Jimmie Gray, one of the leading trainers in the late thirties and forties, and rider of several flat-shod World Champions. Star Gray's dam traces back to Sir Maugray, a rare bloodline, from Auburn Gray's breeding program. Star Gray's sire, Paige's Echo, had eight foundation "F" horses on his papers, his dam had three "F" horses on her papers. These are true Heritage Horses.

Star Gray has a nice disposition and isn't above begging to have the area behind his ears scratched. His foals inherit his gentle disposition and his good looks! Star Gray's pedigree contains 30% Wilson's Allen blood, a rarity in this day and age, especially since the 30% Wilson's Allen only has ONE line back to Midnight Sun. On the videotape, "A Look Into the Past", Dr. Bob Womack says Wilson's Allen, in his opinion, was one of the finest stallions of all time. He sired natural, loose moving foals. Star Gray exhibits the looseness of gait that Wilson's Allen was known for.  His pedigree also goes back five times to the Grey John horses.

In the summer of 2005, Star Gray suffered a bacterial infection that required one testicle be removed. In spite of our best efforts, he never was able to produce a foal after that surgery and was gelded in 2010. He is now an excellent trail riding horse. I am fortunate to have his daughters here on the farm so his legacy will live on through them. One of his sons, NFF Wilson's Society King is still a stallion and now resides at Steppin' Straight Farm in California. Another of his sons, NFF Echo's Blue Moon, is the herd sire for Carbonado Farm in Molt, Montana.

There will always be a place in my heart for this guy. He's a good honest horse. 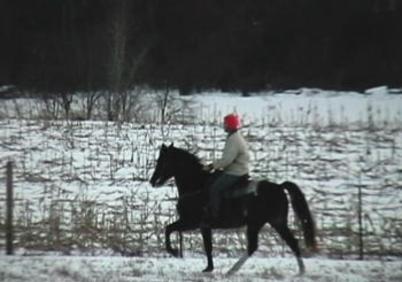 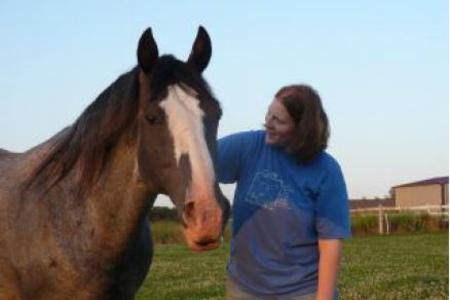 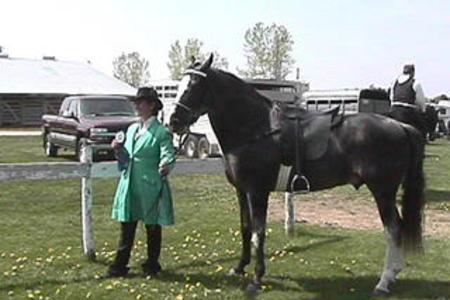 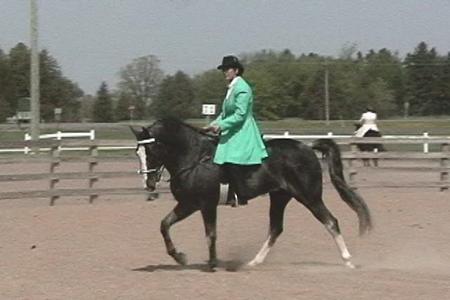 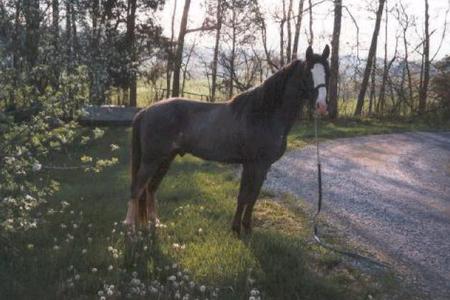 Star Gray and Dena at the Minnesota Early Bird Show on  May 7, 2004. He had never had any formal training prior to going to Dena's. This was his first horse show after approximately 40 days of training. He showed againsst veteran show horses and took First Place in Trail Pleasure Walking Horse 2 Gait!!!

My son, David, riding Star Gray in the winter. The horse is barefoot, never had shoes on him on the farm.